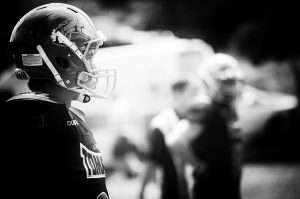 We hear about the superstars every day. You know the athletes who star in the big game and make the big plays. Eli Manning. Tom Brady. Most were gifted from birth and their exceptional genetic gifts and strong work ethics have them leading special, if not privileged lives.

Who knows how many little kids are running around New York and the rest of the country wearing an Eli Manning jersey while trying to be just like him in the pick-up football game at school? One of those kids may be gifted enough, driven enough and lucky enough to be like him some day.

But, those are long odds indeed. So many pieces of the puzzle must fall into place for that dream to come true. God-given talent becomes useless if you don’t work hard enough or are unlucky enough to suffer a bad knee injury.

But, there is another football player every single kid (and person) can actually be like, no matter what gene pool you came from or how short, pudgy and slow you are. That player’s name is Eric Herzlich. He’s a third string linebacker for the New York Giants. So, why is he so special? It all started with this Tweet heard ‘round the world…

“2 years ago I was told I might never walk again. Just WALKED off a plane in Indy to play in The #SuperBowl. #Take That **** Cancer.”

As you can imagine, his tweet went viral. It was re-tweeted by countless people. You might have even seen that tweet but not known the full story behind it.

“Walking off the plane made me think back to how far I had come,” Herzlich said. “Walking down those steps, I remember walking with a limp after my surgery and trying to walk anywhere, so walking down steps again was amazing. I didn’t think the tweet would get that much exposure, but I’m glad it did because it reached a lot more people than I had anticipated in terms of giving them hope. That’s what defeating cancer is all about.”

Herzlich was diagnosed with a rare form of cancer (Ewing’s sarcoma) in his left leg during his senior year as an All-American at Boston College. After surgery, he vowed to come back and play football again. He found motivation in his highlight video and strong family support. Never giving up, he beat cancer and made it all the way to the Super Bowl.

Herzlich added 10,000 followers to his twitter account shortly after he sent that tweet. One follower wrote, “Obviously, this week is all about football and all about playing, but there are people out there who are going through cancer right now who see that and say, ‘Hey, if he is doing it, I can do it too.’”

Just Sit Up Straight! Why Your Poor Posture Is A Warning Sign of Deeper Issues