WHAT?! Popcorn Has More Antioxidants Than Fruits and Vegetables? 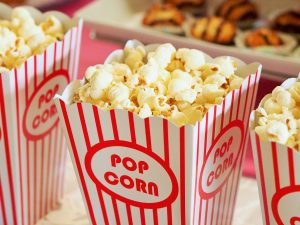  Don’t throw out those old fruits and vegetables! Find out why…
 What’s the best method to cook vegetables without lowering their antioxidant levels?

Imagine someone told you the following: “Popcorn may be the perfect snack food. It’s the only snack that is 100 percent unprocessed whole grain. All other grains are processed and diluted with other ingredients, and although cereals are called ‘whole grain,’ this simply means that over 51 percent of the weight of the product is whole grain. One serving of popcorn will provide more than 70 percent of your daily intake of whole grain. The average person only gets about half a serving of whole grains a day, and popcorn could fill that gap in a very pleasant way.”

Well, according to ScienceDaily, that’s exactly what Joe Vinson, Ph.D., a pioneer in analyzing healthful components in chocolate, nuts and other common foods, had to say.

While speaking at the 243rd National Meeting & Exposition of the American Chemical Society (ACS), Vinson also explained why he thinks this is the case. He said that “polyphenols” are more concentrated in popcorn. He believes this is due to water content. Popcorn averages about 4% water but polyphenols in fruits and vegetables are diluted in 90% water.

It is believed that antioxidants are substances that are capable of counteracting the damaging, but normal, effects of the physiological process of oxidation in animal tissue. Antioxidants are nutrients (vitamins and minerals), as well as enzymes (proteins in your body that assist in chemical reactions). They are believed to play a role in preventing the development of such chronic diseases like cancer, heart disease, stroke, Alzheimer’s disease, Rheumatoid arthritis and cataracts.

Many products are marketed for their antioxidant properties and possible anti-aging and/or possible positive health effects.

Here’s something a little surprising about the popcorn research…

Researchers discovered that the hull of the popcorn had the highest concentration of polyphenols and fiber. The hull is the hard seed-like thing on the inside of the popped popcorn — the part that gets stuck in your teeth or scratches your throat. I bet you hated the hull… until now!

“Those hulls deserve more respect,” said Vinson, who is with the University of Scranton in Pennsylvania. “They are nutritional gold nuggets.”

But, Vinson also gave a warning… He said you can quickly ruin the positive effects of popcorn by cooking it in oil and putting butter or fake butter and salt all over it. That’s the best way to turn a healthy snack into a health disaster.

The one word that will drop a lot of inches off your waistline and help make you healthier is PLAIN. Sure, there are ways to prepare healthy foods to give them flavor that are also healthy. But, when in doubt, go plain.

Here is some advice from ScienceDaily if you are going to eat popcorn…
“Air-popped popcorn has the lowest number of calories, of course,” Vinson said. “Microwave popcorn has twice as many calories as air-popped… About 43 percent of microwave popcorn is fat, compared to 28 percent if you pop the corn in oil yourself.”

On the topic of cooking, what is the best method to cook vegetables so you lose the least amount of antioxidants?

According to a recent study in the Journal of Food Science, cooking on a flat metal surface with no oil (griddling) maintained the highest antioxidant levels. Pressure cooking and boiling led to the greatest loss of antioxidants. Results also depended on the type of vegetable.

One interesting finding from the study was that artichokes were the only vegetable that kept its high antioxidant level during all cooking methods. The cooking methods tested included boiling, pressure-cooking, baking, microwaving, griddling, and frying.

Wait! Don’t Throw Out Those Old Fruit And Vegetables…

According to ScienceDaily: “The results showed that, in the days following purchase, fruits and vegetables did not lose any phenolic compounds, ascorbic acid or flavonols — a trio of chemical classes associated with antioxidant content… In some cases, an increase on the antioxidant capacity was observed in the days following their purchase, accompanied by an increase in phenolic compounds.”

But, even if the antioxidant levels are still high, who wants to eat spoiled produce?

And don’t forget, if you ever have any questions or concerns about your health, talk to us. Contact us with your questions. We’re here to help and don’t enjoy anything more than participating in providing you natural pain relief.

Just Sit Up Straight! Why Your Poor Posture Is A Warning Sign of Deeper Issues